You are here: Home > News > Premier League trophy to appear at Automechanika with Yokohama

Premier League trophy to appear at Automechanika with Yokohama 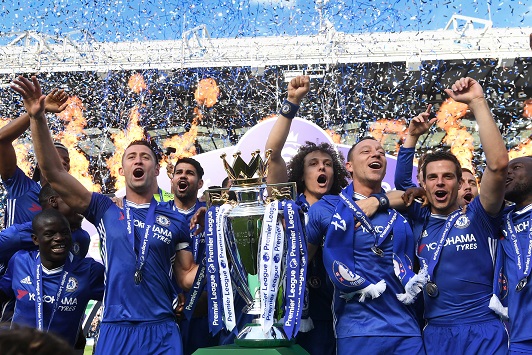 Following Chelsea FC’s magnificent victory in the 2016/17 Premier League, visitors to this year’s Automechanika Birmingham will have the opportunity to have their photo taken alongside the official Premier League trophy which will be appearing courtesy of Yokohama, the club’s official shirt partner.

Chelsea lifted the Premier League trophy at Stamford Bridge after their recent 5-1 victory over Sunderland, making them the first club to take 30 top-flight victories in a 38-game season, as well as securing the club’s fifth Premier League title.

As the trophy will be on display so soon after Chelsea’s victory, its presence is expected to attract scores of football fans to the Yokohama stand (20D80) who will be looking to admire the silverware and enjoy a memorable photo opportunity.

With an overwhelming demand from other Chelsea functions, the trophy will only be on display during the first two days of the show, so fans are encouraged to visit the Yokohama stand early to avoid any disappointment.

“It’s been an incredible season for Chelsea FC and it’s a true honour for us to host the Premier League trophy on our stand at Automechanika this year,” comments David Seward, managing director, Yokohama HPT Ltd. “We look forward to welcoming show visitors and football fans where we will of course be showcasing our latest range of products as well.”

To find out more about Yokohama tyres please visit www.yokohama.co.uk.

This entry was posted on Monday, June 05th, 2017 at 10:21 am and is filed under News You can follow any responses to this entry through the RSS 2.0 feed. You can leave a trackback from your own site.

We use cookies on our website to give you the most relevant experience by remembering your preferences and repeat visits. By clicking “Accept All”, you consent to the use of ALL the cookies. However, you may visit "Cookie Settings" to provide a controlled consent.
Cookie SettingsAccept All
Manage consent

This website uses cookies to improve your experience while you navigate through the website. Out of these, the cookies that are categorized as necessary are stored on your browser as they are essential for the working of basic functionalities of the website. We also use third-party cookies that help us analyze and understand how you use this website. These cookies will be stored in your browser only with your consent. You also have the option to opt-out of these cookies. But opting out of some of these cookies may affect your browsing experience.
Necessary Always Enabled
Necessary cookies are absolutely essential for the website to function properly. These cookies ensure basic functionalities and security features of the website, anonymously.
Functional
Functional cookies help to perform certain functionalities like sharing the content of the website on social media platforms, collect feedbacks, and other third-party features.
Performance
Performance cookies are used to understand and analyze the key performance indexes of the website which helps in delivering a better user experience for the visitors.
Analytics
Analytical cookies are used to understand how visitors interact with the website. These cookies help provide information on metrics the number of visitors, bounce rate, traffic source, etc.
Advertisement
Advertisement cookies are used to provide visitors with relevant ads and marketing campaigns. These cookies track visitors across websites and collect information to provide customized ads.
Others
Other uncategorized cookies are those that are being analyzed and have not been classified into a category as yet.
SAVE & ACCEPT
Powered by